7:00 PM EST. This line opened at -120 or thereabouts at most joints but the efficient market does not agree. Slowly but surely, the price on the Rags has been moving up. Some joints have New York as high as -133 today and that could increase a bit more by game time. Our job is not to predict the winner but to find where the true value lies but let’s first examine all the moving parts.

New York is favored here for many reasons, none of which we agree with. First, they finished the season with more points and more victories than the Penguins. God knows, the market and media salivate over wins and losses more than anything else. The media almost always reports if a team won it played well and if it lost they didn’t, which is about the most absurd thing we continually observe when it comes to the NHL and the media coverage.

Take these reports from last night between the Bruins and the ‘Canes. 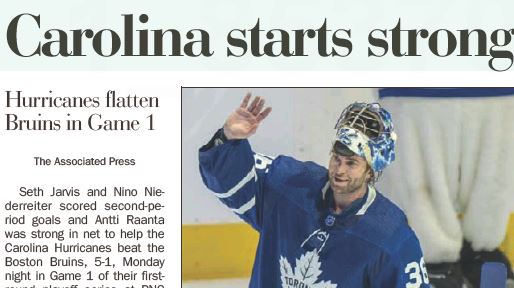 Read the two headlines from two different publications. Had you not watched that game and just saw the final score, you would trust the reports that the B’s got “blown out”. The headline doesn’t read, “Bruins run into hot goalie and then in fine print underneath, “Despite valiant effort”.

Trust us when we suggest that Boston should’ve been up three goals in the first period because that’s how badly they outplayed the Hurricanes. We mention this because it applies to this series and the Game 1 matchup. The media reports makes one think that the B;s pulled a no show and got destoyed when in fact, that's not close to being true.

The media is reporting that the Rags are much better than Rangers and it's based on recent results, final scores and standings and not the performance on the ice. The Rags also beat up on Pittsburgh during the regular season. You’ll read about that too. What you won’t read about is that the Rangers were the luckiest team in the NHL by a wide margin. Rare is it when New York outplays anyone with any fire in their bellies.

In puck possession time in the offensive end during five-on-five play, the Rangers finished 25th just ahead of the following teams: Philadelphia, Montreal, Detroit, Islanders, Chicago, San Jose and Arizona. You know what all those teams have in common? They all missed the playoffs. New York didn’t because of one player and one player only. Igor Shesterkin should win the MVP this year by a landslide because without him, the Rags would be in the company of all those aforementioned also-rans.

The Rags were a top-10 team in both Penalty Killing and Power Play percentage (special teams) and that’s another narrative that the media and public eat up. We’ll reiterate that it’s a luck-driven stat that fluctuates like crazy from week to week, month to month or year to year. Do you know who had the second best penalty kill percentage in the NHL this past year? San Jose. Tampa Bay hit at 48% in the final two weeks of the season but didn’t get a shot on net in a five-minute PP in the first period yesterday. Point is, PP %, PK % is all luck-driven and if water does indeed find its level, regression may be in the cards for the Rangers on both fronts.

Igor Shesterkin led the league in both save percentage and goals-against average — by a wide margin. In the other crease, Casey DeSmith has to be great and there’s no indication that he can’t be. He was great in more games than not this year and while we must give the edge to the Rags in goal, it's not going to deter us from playing Pittsburgh.

Very few people are giving the Pens a shot here, citing their age and their playoff failures over the past three years. That could be true but we’re not ready to write them off yet. The Penguins still run out two great lines, tons of experience and the knowledge that this is their last chance together to go on a run. They will also come into the first round as underdogs for the first time in a long time, which means they are playing with house money for the first time in the Crosby/Malkin/Letang era. Of the 37 predictions we saw from analysts on ESPN, Yahoo, and others, only seven had the Penguins advancing, which is an accurate reflection of the market, yet the series price is only New York -125? We’re not going to play the series just yet. We’ll see what the Rangers and Pens bring to the table in Game 1 and if New York wins convincingly and the Pens look old and slower, we’ll probably back off. However, in Game 1, with all the pressure on the Rags and the Pens coming in with a chip on their shoulder, we’ll take a swing at this inflated price that the efficient market drove up. Pens it is.