1:00 PM EST. The 11-5 Colts grabbed the new No. 7 seed in the AFC but that only made them face the No. 2 seed that would have been on a bye in past seasons. The 13-3 Bills are on a six-game winning streak and look like the best bet of anyone possibly knocking off the Chiefs before the Super Bowl. The Bills are fresh from a 56-26 win over the Dolphins in a meaningless game. Yeah, that might be worth repeating. In a meaningless game in which Miami opened as a 2-point dog and closed as a -3½-point favorite after the efficient market got a hold of the number, the Bills scored eight TD’s and won by 30.

The Bills are one of the new, exciting teams that have exceeded all expectations and become one of the NFL elite in HC Sean McDermott's fourth season. Josh Allen took a monumental leap forward in his third year after being known more as a rushing quarterback than as a good passer. The only facet of this offense that isn't top-rated are running backs but Allen is still a dangerous runner. The Bills secured home field advantage in all playoff games other than if they go to face the Chiefs. And right now, that's where smart money is. The Bills are not only a top team, they are peaking at the right time.

We are in the buy-low/sell high business and from our perch, it is the Bills and not the Colts that offer up the value here and it has nothing to do with X’s and O’s, instead it has to do with Strength of Schedule.

In 2002, the NFL expanded to its current format of 32 teams; eight divisions with four teams each. There wasn’t much upheaval as the league added the Houston Texans to the AFC and Seattle switched to the NFC. Two new divisions were created as the league kept the integrity of the established divisional rivalries pretty much intact. The playoff format was modified so that four division winners and two Wild Cards from each conference would advance to the playoffs.

Two regular season scheduling changes were implemented based on the expansion and the four-team divisional format. Only two games each season would now be based on the previous year’s record (down from four) and the league assigned a divisional rotation schedule. This insured that all teams within one division would be assigned to play all of the teams from another division in each conference. This was done on a rotation basis so that all teams would play each other at least twice every eight years, and would play in every other team’s stadium at least once during that same time frame.

The result was that there seemed to be a greater disparity based on happenstance rather than intent as teams faced eight teams from two divisions. This resulted in a very similar schedule to the other three teams in its division rather than a schedule more in common with the other poor teams across the league. No longer did a team that finished last get the benefit of avoiding top finishers and facing a quarter of its schedule against other last place teams the following season.

This year, the Colts played the 32nd ranked Strength of Schedule (SOS) in the league according to Sagerin ratings while the Bills played the 13th ranked SOS. And for what it’s worth, since 2002 teams with a SOS advantage of 10 or better are 28-6-2 ATS (82%) and that my friends is not a trend, it’s a checkmark for the more battle tested team while pointing out that Strength of Schedule is a great indicator of who is legit and who is not. 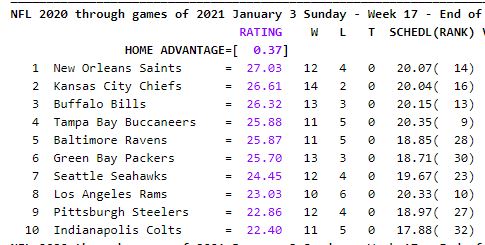